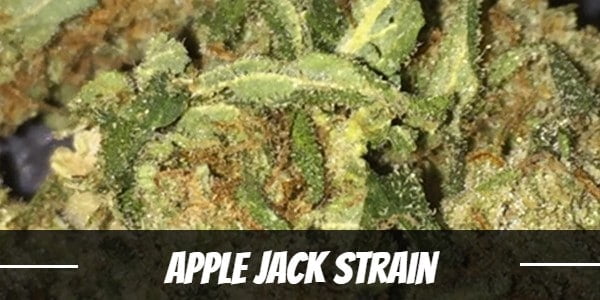 Some strains are known for being delicious, some are known for being enjoyable. Then, there are the strains known for being both, and that’s where you’ll find Apple Jack weed. This strain is a perfectly 50/50 balanced hybrid with THC levels hovering around 20 %. The high is mellow, making it an excellent strain for those that like to stay functional. With a creative head high alongside a tingly body buzz, Apple Jack strain is perfect for spending long days with friends.

The Apple Jack weed strain was created through an inspired cross of White Widow and Jack Herer, which is the source of its delicious flavor and unique buzz. Is the Apple Jack strain indica or sativa? Most people will not ask this question – it’s such a well-rounded experience that the balanced blend is obvious. However, it’s definitely a recreational strain! The intense tingly feeling and euphoric buzz make it a little distracting for therapeutic users.

Here are some amazing seed deals. Buy 10 and get 10 seeds for free!

Apple Jack is one efficient strain. Users often find that it kicks in within minutes, with a euphoric, giggly buzz melting throughout their body. It’s a focused feeling that’s super creative, helping get you hyped for a long afternoon of socializing with friends. It’s also useful for keeping you awake late into the evening as long as you’re pacing yourself, helping to keep the party going.

The balanced genetics supply an impressive body buzz, as well. Apple Jack leads to an incredibly tingly and relaxing body buzz, making it a full-body experience. It’s grounded enough to keep you from floating away while adding some fun. The combination of the two makes this a solid choice for weekend-long festivities.

Some people find therapeutic uses for Apple Jack, especially for chronic pain, muscle spasms, and anxiety. However, keep in mind that this strain does a little bit of it all. Using Apple Jack to unwind and relax is its most important benefit.

The Apple Jack weed strain is appropriately named. Like the cereal, this strain is fruity, with just a hint of spice in the smell. There’s a hint of pungent earth underneath, so you don’t forget this strain’s famous parents.

The flavor of Apple Jack weed is genuinely outstanding. The sugary sweet apple flavor and the earthy spiciness blend into a complex but delicious experience. The exhale includes a hint of tartness that helps round it out into an enjoyable smoke.

Apple Jack is a powerful experience, so new users should take caution when taking their first toke. It’s not a bad idea for casual smokers to take a puff and then wait a little while to make sure that they are comfortable. Overindulging can occasionally lead to drowsiness, but some people report mild anxiety and paranoia stemming from the energy this strain offers. Outside of this, most people find Apple Jack an enjoyable smoke if they keep a glass of water nearby to help fend off cottonmouth and dry eyes.

Download my free Grow Bible and grow your own Apple Jack!

The Apple Jack strain is still relatively rare, so grow information is challenging to find. We do know it is a balanced strain and moderately sized plant that’s not too hard to grow.

Apple Jack plants reach about four to five feet high when grown indoors and can grow a little taller outside. Plants can sometimes get bushy, especially if you train them with the Screen of Green method or with high-stress training. This bushiness can occasionally lead to problems, but keeping your plants trimmed can prevent issues like mildew or pests from developing.

Growing your Apple Jack plants inside is a great option. Expect your harvest to be ready in about nine weeks indoors, with yields of 14-16 ounces per square yard.

For growers in the northern hemisphere, the harvest is typically ready in mid-October. The Apple Jack marijuana strain can produce up to 18 ounces of bud per plant outside in warmer climates as long as you can keep the plant safe from pests.

What is the Apple Jack strain yield?

How much THC does Apple Jack have?

What are the origins of the Apple Jack strain?

Apple Jack was created from a mix between White Widow and Jack Herer.

Have you ever smoked or grown your own Apple Jack? Please let me know what you think about this marijuana strain in the comments below.

The founder of I Love Growing Marijuana, Robert Bergman, is a marijuana growing expert that enjoys sharing his knowledge with the world. He combines years of experience, ranging from small-scale grows to massive operations, with a passion for growing. His articles include tutorials on growing… [read more]

Moneybagg Yo, Gumbo Shut Down Miami for ‘Shot Off’ Launch